With the HP4 RACE on the Isle of Man.

Spectacular test on the Isle of Man: Peter Hickman rides the HP4 RACE on the fastest course in the world and projects the future with the innovative motorcycle on the tradition-steeped racetrack. A test run on the limit.

When the HP4 RACE number 001 left the BMW Motorrad Berlin works, industrial mechanic Süleyman Aktepe had prepared the carbon racer on the role. Service is done, the technology is checked, the bike is approved. Now the machine looks ready to race out on the starting grid on the Isle of Man. Here, the fifth season on the island is in full swing, when the tranquil isle in the Irish sea becomes the hub of the world like every year at this time.

Tourist Trophy – it's about testing out your own limits, every now and then stretching them, and ideally expanding them. The latter is Peter Hickman's intention anyway. On the incredibly fast and spectacular racetrack, he wants to ride the HP4 RACE in a test run right up to the limit, and conquer notorious opponents with it: the Isle of Man TT. 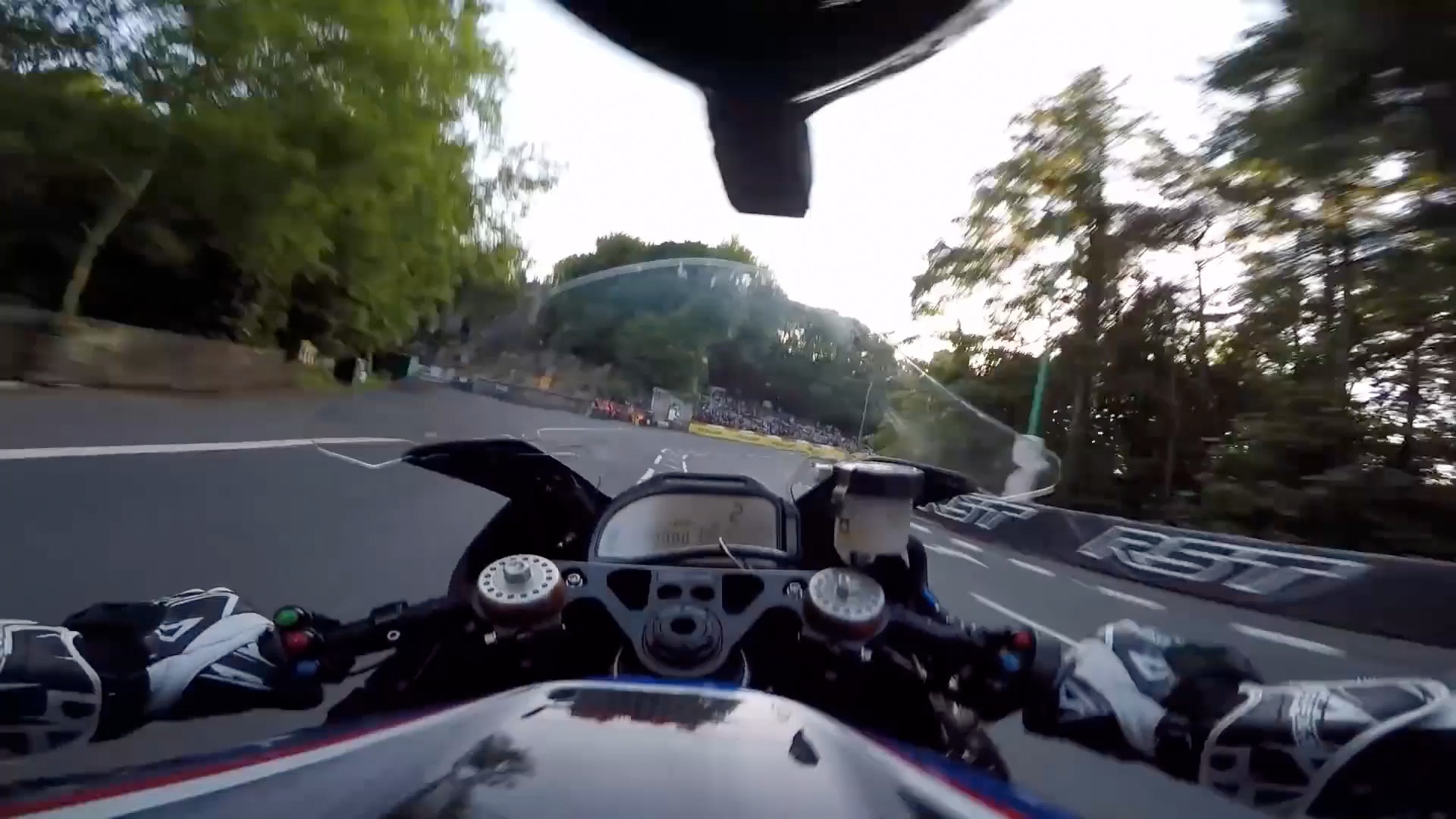 The track – 61 kilometres of wonderful scenery. Avenues with ancient tree populations, grazing herds of sheep, villages. Past stone walls and garden fences, behind which spectators line up, who are at least as adrenaline-fuelled as the riders themselves. No other racetrack in the world has so many bends and jumping hills, and no other has so many high-speed straights. The flag at the starting point in Douglas is raised and Peter Hickman races out onto the Snaefell Mountain Course, which he knows right down to the last detail. Every summit, dip and bridge. Every kerb and every manhole cover. On the Sulby Straight, the Englishman turns the throttle again and revs the 215 HP machine to the maximum.

+ Read more
"
I averaged 120 miles per hour (193 km/h), even though I sat on the bike for the first time. Then I added a few wheelies so that the spectators could enjoy it as much as I did. "

On the Mountain Course.

On the Mountain Course.

Peter Hickman completes two laps with the HP4 RACE around the circuit. Average speed: 120 miles per hour (193 km/h) – including a few wheelies in fifth and sixth gear. "That was totally unique and special", says Peter, arriving back in Douglas. Beaming, he recounts of the bike's easy handling. "I sat atop the HP4 RACE for the first time and was fine. You think that carbon makes the machine a bit harsh and rigid – but this is not the case. The feedback of the HP4 RACE was better than that of my superbike".

Peter Hickman confirms what project manager Christian Gonschor describes as an outstanding character trait of the exclusive machine. He was the one who launched the HP4 RACE at the beginning of 2015 with a small team. As the former Chassis team leader in the BMW superbike world championship works team and passionate motorcyclist, he quickly had a vision – one inextricably linked to the topic of carbon. Carbon rims, carbon rear and above all: the industrial small-scale production of a fully carbon chassis – a milestone. "The HP4 RACE pushes all limits", Christian Gonschor says. "There has never been such a light, powerful, exclusive and innovative motorcycle".

Using high-quality materials like titanium screws, but above all using carbon components, the developers reduced the weight of the HP4 RACE down to 146 kilos empty weight. This is a consistent lightweight construction. In doing so, the motorcycle is lighter than the latest factory racers from the Superbike World Championships and barely heavier than factory bikes from the MotoGP. "We went about it like sports riders. Always wanting the best, without compromise, this is what we gave the bike", product manager Josef Mächler tells us. He himself is active out on the racetrack and has test ridden the HP4 RACE several times. "Everyone who worked on this motorcycle is infected with the race virus".

+ Read more
"
We have created a legend and are not only writing company history, but also a piece of history for everyone who was involved with the creation of the HP4 RACE. "

Correspondingly, Josef Mächler could hardly wait for the machine's appearance in front of the great backdrop of the Isle of Man. Peter Hickman on the other hand experiences one of many highlights when test riding the HP4 RACE. After having never yet made it onto the podium at the TT, he achieves a sensation this year with the S 1000 RR: five podium positions in five races, including second place in the Senior TT and victory in the "Joey Dunlop Championship Trophy" for the best overall performance. We will nevertheless never forget his ride atop the HP4 RACE. "It is incredible how easy the bike is at changing curves. Especially at top speed, this makes a massive difference on a circuit like the Isle of Man TT with a lot of quick sections. The bike is the future. A fully-fledged superbike, an absolute racing machine – without a doubt".

+ Read more
Make Life a Ride.
Wake up to life every morning with your engine running.
Learn more
Training Makes the Rider.
Knowledge and experience on two wheels.
Learn more