Created with strength and grace

Fuel tanks and jerseys, helmets and tools, calligraphy and photography: the workshop – or rather the wonderful and orderly chaos – of Shinya Kimura, one of the most sought-after customizers in the world (and one of the most interesting ones!), is packed with mementos and astonishing items of all kinds. No more than two or three motorcycles leave his holy halls each year. During his modification projects, he focuses on only one bike at a time to be fully invested in the project. The flow and harmony as well as the Wabi-Sabi of Japanese aesthetics play a crucial role in this. The patina and the genuine character of the – mostly – old motorcycles are just as important to him as the essence of the future rider. After all, it’s the rider who completes the project. So it’s all the more exciting that this time Shinya has a brand-new R 18 in his workshop and the rider concerned is no less than he himself.

Customized motorcycle. Not for sale. 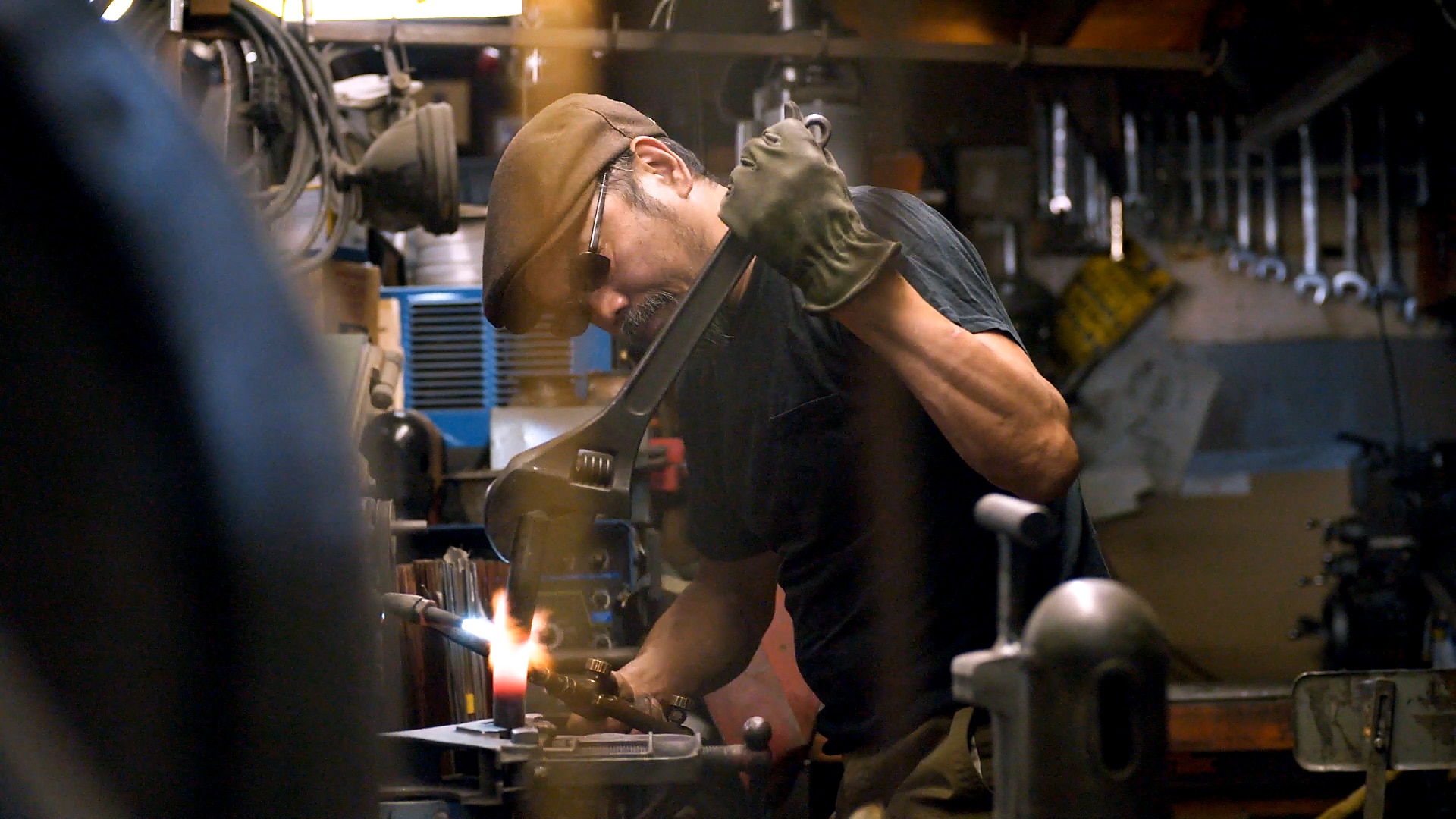 My approach comes from making, from feeling. Without sketches or drawings, blueprints or models.

Where does this feeling come from that Shinya works with? He gained experience at his parents' rivet factory in the center of Tokyo with all its heavy smells of oil and cold steel plus the constant hammering of the machines. All this shaped his subconscious mind and modeled his first workshop concepts. His father was a poet and his mother had mastered the art of calligraphy. Consequently, Shinya also seems to have an aesthetic sensitivity ever since the day he was born. As a result, he carefully studies the heritage, roots and character of every bike he modifies, paying attention to every detail. With the R 18, this is undoubtedly a lot to handle. Shinya recognized this very quickly.

Seeing the big boxer engine with his own eyes quickly made him realize that this was the largest engine he had worked on to date. However, the initial feeling of respect vanished after a very short time. The way it handled reminded Shinya of the many motorcycles with boxer engines that he had owned in his life, especially the R 69 S. He was quickly impressed by how easy the R 18 was to handle and the feedback it gave him. However, the first time he twisted the throttle, he felt a completely new boxer engine experience as the unbridled power of the 1,800 cc unfolded. Shinya felt like a man possessed by an almost unspoilt riding pleasure, making it hard for him to get off the bike. While riding, he distinctly felt that "it was not chaotic, unhinged power – but full of sovereignty and elegance. Something that only BMW can do." He quickly established a name for the modification project: “The Wal” – a combination of unadulterated power and dynamic grace.

And consequently the motorcycle’s focus was also quickly established: “The Wal” had to match Shinya and his way of riding. He called his specification the “Sports Endurancer”. A stretched, dynamic seating position and a range of trims were essential to satisfy the lust for long trips on the big boxer that had just developed. During the modification Shinya was particularly happy with one thing: basis of his feelings and demands without changing the bike’s impressive handling and riding experience even in the slightest. Consequently, the R 18 even managed to surprise the master of the wonderful and orderly chaos.

The bike in detail

Frame and suspension components are identical to the original. Shinya saw no potential for improvement for his “Sports Endurancer” in this context.

First, Shinya gave all parts due to be painted a hammer finish and an even texture before they were powder-coated in a bronze tone.

Shinya designed the seat himself. BACKDROP Leathers in Japan took charge of its production. The deep bucket seat allows riders to almost completely become one with the bike.

The iconic teardrop shape was replaced by a differently shaped fuel tank to add some extra drops to the fuel capacity: thanks to its elongated box shape, the fuel tank now holds approximately an added gallon of fuel.

After having completed all bodywork components, Shinya thought long and hard to come to the conclusion that the iconographic lines of the exhaust pipes need no more than a black coat of paint.

Just like all other body parts, this aluminum component was shaped by hand. It completes the harmonious lines as well as the flow of the bike and also includes the striking, round rear light.

And how will you design your R 18?

And how will you design your R 18?

The design and iconography of the R 18 will set the heart of any customizer racing. However, our configurator will raise your pulse.

+ Read more
Build Your Own

Customized motorcycle. Not for sale. The vehicles shown are modified and equipped with third-party accessories and/or proprietary parts that are neither manufactured, distributed nor tested by BMW. BMW assumes no liability for the modifications (including the installation, characteristics and use of the accessories shown). CAUTION: Modification of production vehicles (including the installation and use of third-party and proprietary parts) may impair riding characteristics! Riding our vehicles in modified condition is at your own risk.

Sign up to the Heritage Newsletter here to make sure you don't miss a thing.